At Scrutinizer, we already notified you of SQL injection issues f.e. if you did not use parameter binding offered by PHP’s PDO abstraction, or libraries like Doctrine. However, there is a whole range of other PHP functions that are safe per-se, but can lead to severe security issues if passed arbitrary user input. file_get_contents for example is one of these functions. Malicious users can use it to gain access to sensitive credentials from your application.

Flagging each call to file_get_contents would be a very naive approach and not really helpful. However, at Scrutinizer we have invested into a solid foundation. Our PHP analyzer is almost like a compiler for PHP and uses advanced techniques such as data flow analysis, and abstract interpretation which distinguishes us from other competitors, or also existing open-source tools that only use AST-based approaches. It are these very analysis techniques that help us understand how data flows through your application.

In the most recent version of PHP analyzer, we have added a security analysis framework that specifically focuses on making sure your request data is not ending up in one of PHP’s sensitive functions, and that consequentially could make you vulnerable to injection attacks. Let’s take a look at an example:

In this example, we are assigning a YAML configuration from request data to a class property, and then save the new instance. Let’s see what Scrutinizer finds when analyzing this code: 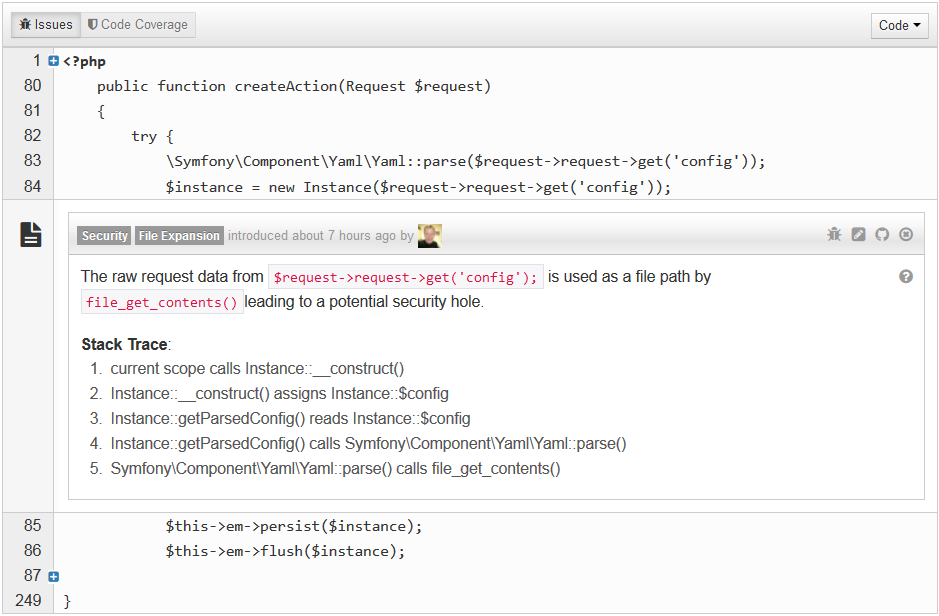 This might come a bit unexpected. There is no problem with database persistence here, Doctrine takes care of escaping the content for us, but we still introduced a security issue by passing raw request data to the Yaml::parse() function which in turn calls file_get_contents(). Let’s take a look at it to see what is happening there:

This function has a feature that expands the input in case it is a valid file path, and replaces it with the contents of that path before parsing its actual contents. If someone were to pass a path such as ../app/config/parameters.yml, he might gain access to the parameters file of a Symfony2 application.

I would like to point out that we have not hard-coded the Yaml::parse function in PHP analyzer, but since we not only analyze your application, but also all your dependencies. We also assess the security relevance of the specific dependency version that your application uses. Analyzing your dependencies is even more important as you might not be as familiar with your dependencies’ code and consequentially also not aware of some of their features such as the file expansion shown above. This also allows us to compile a stack trace for you that aids in assessing the security issue more easily.

We are proud to now add this additional level of security to your PHP applications on Scrutinizer. Currently, we support tracking request data from Symfony2’s, and Zend’s request abstraction, as well as usage of PHP’s super globals like $_GET. If you are using another request data abstraction, just let us know by opening an issue.

If you experienced a bug or have any questions, please send them to [email protected].